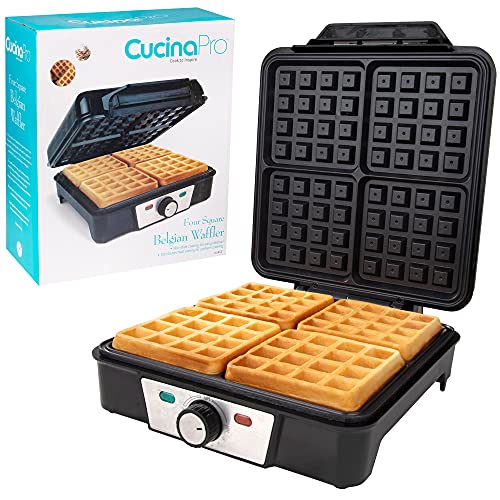 We basically bought the CucinaPro Belgian Waffle Iron due to its size and cooking capacity. The waffle maker reviews we found had a mix of pro and con. I think that’s a good thing though; at least I already know what drawbacks I might encounter along the way.

Who is It Suited For?

I have tried several Belgian waffle recipes using this waffle maker and they all came out crisp and tasty. If you have a pressing need to make lots of great tasting waffles in the morning then the CucinaPro unit 1452 will be a big help. It makes four huge waffles at a time; which means you can make more waffles whenever you need it.

Reasons Why I Love this Waffle Maker

The dimensions of this waffle iron are as follows: 9.8” x 13” x 4”. It can make four 4.5” waffles at a time. The weight of the unit itself is 8 pounds. This item is designed to be stored upright to conserve space.

I still think that this is one of the best Belgian waffle iron models for its price. However, I do have a couple of small complaints. First off, it started to make a bit of noise after a year of use. It doesn’t bother me a lot since it isn’t really that loud. And it hasn’t broken down after two straight years of regular use.

Another downside I would like to mention is that the instructions aren’t any good. However, the controls on the unit are very easy to figure out so I didn’t really need the manual after all. In spite of these minor flaws, I still think the CucinaPro Belgian Waffle Iron gives you good value for your money.

Recent Posts
Categories
About us

Kitchen-Review.com is a participant in the Amazon Services LLC Associates Program, an affiliate advertising program designed to provide a means for sites to earn advertising fees by advertising and linking to Amazon.com